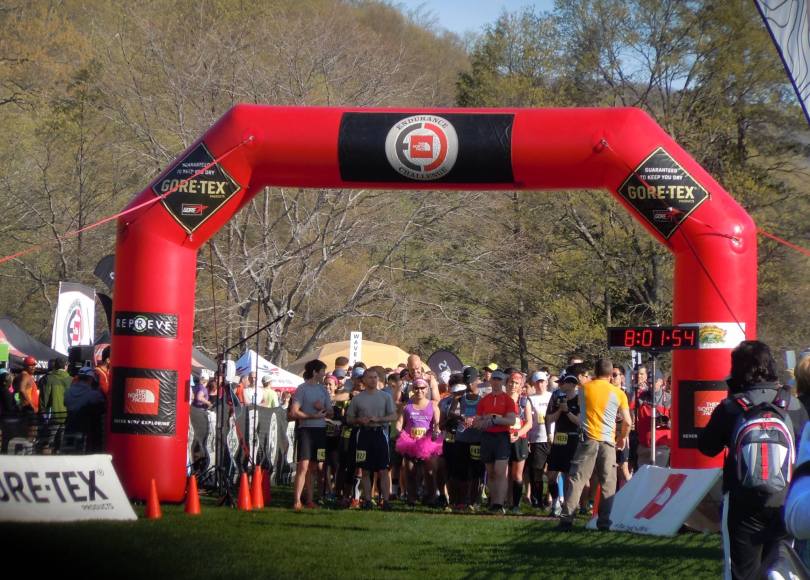 Now that I’m sitting in flight to ORD, I’ve finally had a chance to think and reflect upon today’s race. While I went into Bear admittedly feeling quite a bit ambivalent about racing, I have to admit that I am quite pleased with the result.

When I woke up this morning, I was not excited to race. I didn’t bounce out of bed as I normally do on race morning (well, let’s be honest, I don’t actually bounce out of bed on ANY morning except for Christmas), but I definitely did not feel the anticipation and excitement of race day. The reason for this is due to an incredibly tough (read: shitty) training block in April. Between feeling exhausted in the beginning of the month, and with me changing my nutrition plan in it’s entirety, I’ve had some incredible failures in training and in racing. I won’t even talk about what happened during the Hook Mountain Half two weeks ago, except for the fact that it was a massive disaster. So after stumbling out of bed and eating breakfast, I put on my race outfit (not including the pink tutu, which came later) and drove to the race with Alysen, not feeling overly excited.

Once the race started, I still wasn’t in the right mindset to race, but luckily the congestion in the first mile or two allowed me to take it easy and relax into the race. Although we had just started running, I noticed how other runners around me were already breathing incredibly hard. A bit surprised at this, I decided to stay with the pack and in control, in case I was missing something (you know, in case I forgot I was actually running…uphill…with rocks…).

This, in retrospect, turned out to be the right move because it set me up quite nicely for the race. While I felt the effort of those around me, the fact that I was feeling somewhat relaxed and in control gave me a boost of confidence. It also allowed me to keep myself calm on the early flat/downhill sections, especially when we hit Anthony Wayne and we could run on ROADS! I was so happy to see an actual road, that I picked up the tempo a little, to about a 7:15/7:30 mile pace, until I realized that was mile 4.5. Of a 13.6 mile race. Up a mountain. With that clearly in my head, I eased back into a nice and easy long run pace until we got back into the trails.

Once in the trails again, I focused on Bielik’s plan of power walking up the major uphills and really attacking the downhills and flats. This led to some interesting “tag” games with a few other racers: I would pass them on the downhills (sometimes making my own trail) and flats, but then they would catch up on the uphills. I knew that they expended far more energy than I did during those uphill runs though, so I tried to focus on my race and stay on plan.

I have to say that it worked rather well. While I struggled up Timp Pass (along with everyone else, as it’s about a 25% grade during mile 9-ish of the course), once we were back on runnable terrain, I was able to finally pass and drop most of the folks I’ve been playing tag with.

When we passed the mile 10 marker, I realized that I had a realistic chance of hitting my original goal time. In order to do so, however, I’d really have to push myself and just ignore the pain in my ankle, quads, and calves and just go for it. After a little back and forth with myself, I said “Fuck it” and took off. This plan worked for a while, and as we were running within familiar territory at this point (we had run portions of the course about 3 weeks prior), I thought I knew where all of the upcoming hills were.

It turns out that my old age has really affected my memory, as there were two significant hills within the last 2.5 miles of the course that brought me to a screeching halt. Prior to approaching those hills, I was flying at approx. sub-8 pace and feeling like I could hold it. Then I would turn a corner and suddenly a massive incline with non-runnable rocks would appear. More than one racer heard me say, “What the fuck? Where the fuck did this come from?!” With nothing more to do other than go up the hill, I climbed it the best I could and negotiated with my legs, telling them that if they run for me once I crested the summit, it’d be the last hill they’d see. As it stands now, I lied to them a few times, but I’m more than certain they’ll pay me back for it tomorrow.

Once we entered the last half mile, I essentially tried to focus on the finish line and the fact that just about 4 minutes of pain was left before I stopped. Upon entering the finishing chute, I tried to spot my teammates and coaches, but unfortunately my left calf cramp that started to bother me during mile 11 was really starting to announce it’s presence. Not wanting to keel over and die in front of my teammates and coaches (think of the paperwork TNT would have to fill out for that), I tried to focus on just crossing the line. Sadly, this focus led to my only regret of the race, which is my inability to perform my patented “John Tan Finish Line Jump Cross,” a la Rev3 Maine and NYC Tri. Oh well, there are other races.

With all of this being said, Bear really taught me two important lessons. The first lesson is that I truly have to listen to the advice that I had given several other TNT participants and friends prior, about training. Whenever someone was upset about a bad training session, I told them “It’s OK to be upset about a bad training session, but realize that a bad training session can bring more mental gains than what you potentially have lost in physical gains.” Getting through a bad session teaches you how to overcome the adversity and challenges we all face during races. We also learn how we deal with such adversity, and learn how to better cope with these situations. We can refer to these difficult sessions when we face adversity in a race, and remember how we moved past it and know that we can move past whatever issue we’re experiencing. Except for a broken leg. If you break your leg, you’re pretty much shit out of luck. But barring that, the key to getting over these sessions is to understand why you failed. Understand the reason, learn from it, and move on. I had forgotten this, and also about the fact that we’re not the result of one or two (or more) bad sessions. We’re the result of the accumulation of work we’ve done throughout the season and years, and as long as we’ve put in the effort, we’re going to be just fine.

The second lesson Bear taught me is about pushing through the suffering. Having just started training again in January, from injury, and having experienced a significant amount of suffering in IM Mont-Tremblant 70.3 last June (those who were around me at the Finish Line can attest to this), I’ve been afraid of pain. I’ve been afraid of pushing myself in training and in races as hard as I used to, because I’ve been afraid of the pain and potentially getting injured. I’ve been afraid to push myself beyond and perceived mental and physical limitations, because I began to doubt if I could. I lost faith and confidence in myself, and I lost what it means to really challenge yourself. Bear helped me realize today that I still have this ability. I suffered a bit during today’s race, but rather than taking it easy, I pushed harder. When I wanted to stop climbing Timp Pass and take a few minutes break, I refused and kept going. Part of that was due to my fear that gravity would then take over and I would tip over and fall onto the other runners below, but a large part of it was the fact that I knew that I could keep going and that I really didn’t need to stop. It’s this knowledge that I’ve been missing, and Bear helped me regain this.

Now that’s not to say everything will be OK going forward, and that I’ll be clocking in sub-7 miles with ease again, or that I’ll be able to generate a higher FTP on the bike now. I know I’ll continue to have my challenges, and I know I’ll continue to have some bad training sessions, but I also know I’ll be better equipped now to handle them. I have six more weeks or so until my main race for the season, and in that time, I’ll mentally reset myself, dial in my nutrition, and work as hard as I possibly can to be as ready as I can be come race day.

After all, the best thing you can do to prepare yourself for a race is approach it with confidence (and have an awesome Finisher Pic).